George Lawson, a fellow graduate of The Master’s Seminary, reminds us Who our hope is in as the elections draw near.  You can find the entire article here:  Reliable Source Reveals November’s Election is Already Fixed.  Lawson’s closing lines realign our focus:  “But don’t place your hope in a ballot box or lose your hope in a ballot box either.  The election has already been fixed and a reliable source reveals that God wins!” 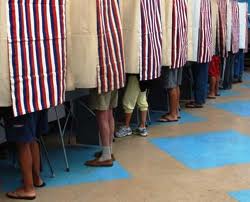 … The next president of the United States will not be determined by hanging chads and dimples on the ballots in Florida.  It won’t even be decided by the elite electoral college (regardless of what you may have heard).  A reliable source reveals that this year’s election has already been fixed.

What is this reliable source?  — the Bible.  And no, I am not advocating some secret code contained in Scripture.  I’m sure if you rearranged the letters in some verse in the book of Revelation, you could spell Mitt Romney, Barack Obama or Cap’n Crunch!  No, the Bible does not reveal who the next president will be, but it does reveal that the outcome has already been fixed by a sovereign God.

Psalm 115:3 says it this way, “But our God is in the heavens; He does whatever He pleases.”

Psalm 103:19 adds this thought, “The LORD has established His throne in the heavens; And His sovereignty rules over all.”

And then we learn this in the book of Daniel…

“The Most High is ruler over the realm of mankind, And bestows it on whom He wishes, And sets over it the lowliest of men” (Daniel 4:17)

God’s sovereignty, or unopposed rule, will be the true deciding factor in November’s election, just as God decided who would govern the ancient kingdoms in the Near East.

…Now all of this is not to say, you should not exercise your right to vote. Get informed, get involved and get in line to vote for the candidate that best represents biblical values.  But don’t place your hope in a ballot box or lose your hope in a ballot box either.  The election has already been fixed and a reliable source reveals that God wins!