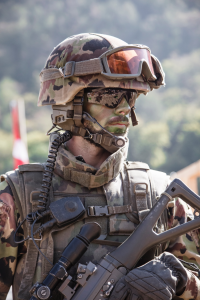 Note from Tim: Over the next three days I will be publishing a short devotional each morning (I began HERE). I originally wrote these devotions for the Winter 2018-2019 issue of Open Windows and I have permission to republish them. I pray they are an encouragement to you in your walk with Christ!

“Share in suffering as a good soldier of Christ Jesus.” – 2 Timothy 2:3

My friend Bill was a soldier serving in Afghanistan when his life was forever changed. An explosion rocked their Stryker vehicle, burning him badly. I will never forget him saying that he was proud to have served his country. By definition, a soldier’s duty is often difficult.

Paul exhorted Timothy to be a good soldier of Jesus Christ. The incredible thing is, the apostle Paul was not doing this while he relaxed at home in his recliner with a cup of coffee. Paul was in prison, in chains. Second Timothy is a dispatch from the front lines. Timothy needed courage and endurance because of the difficulties of taking a stand for the gospel. This encouragement from a dungeon powerfully reminded him that he was in a spiritual battle and that his captain was the Lord Jesus Christ.

How is your courage and endurance for Christ today? Consider what a privilege it is to be in His army. As Paul reminds us a few verses later, “remember that Jesus Christ of the seed of David was raised from the dead” (v. 8).

Father, may I be a good soldier for You. Help me to remember whose army I am in when difficulty comes my way.